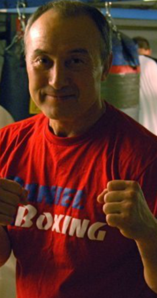 Daniel Choi, Founder and CEO, in Anchorage, Alaska began Daniel Boxing School in 2007. Daniel comes from a lifelong successful boxing career in which he utilizes to teach his students. Daniel Boxing School was opened in order to provide Alaskans the opportunity of having a professional boxing gym that is comparable to other states. Daniel's goal is to create an Alaskan boxing champion from the knowledge and skills that he has learned throughout his life.

Daniel Boxing School is a drug free zone that emphasizes the importance of teamwork, sportsmanship, and fair play. Daniel Boxing School strives to reach out for a healthier lifestyle and to focus on the youth of the community as an outreach on courage, discipline, and respect. Our goal is to touch the lives of as many individuals as possible with the positive benefits of boxing.